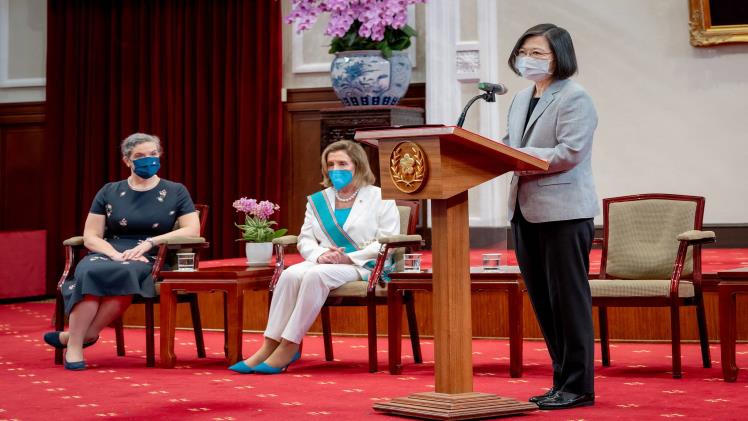 Pelosi, 82, a Democrat, stepped on Taiwanese land for the first time in 25 years as Speaker of the U.S. House of Representatives and met with President Tsai Ing-wen, 65. Taiwan welcomed the meeting, and there was widespread support across party lines in the U.S. Congress. China, on the other hand, reacted furiously and announced military drills in the form of a blockade of Taiwan. There are fears that China will use the visit as an excuse to escalate its threats against Taiwan, and the situation is likely to remain volatile. Pelosi has repeatedly criticized China, including protests at Tiananmen Square in the past.

If democratic Taiwan is invaded, the entire Indo-Pacific region will suffer.

Although Taiwan is not a part of NATO, the stability of peace in the region is of a great concern for NATO as well.

In a press conference with Pelosi on March 3, Tsai stressed the significance of Taiwan’s presence in the camp of democracy, and as her second term as president passed the halfway mark, she expressed her determination to oppose China in solidarity with the United States under the banner of “democracy.

Tsai presented Pelosi with a medal of honor in appreciation of her longtime support for Taiwan. She also praised Pelosi for her “long-term commitment to democracy and human rights,” and said that Taiwan is a “dependable partner of the United States.”

The Tsai administration, which had previously maintained silence, made a complete about-face on this day and took a public stance by broadcasting the press conference live on the Internet. This was seen as a reaction to China’s increasing pressure, and expressed her determination to confront China.

On the second day of the meeting, 26 volunteer members of the Senate, the opposition Republican Party in the U.S. Congress that is in opposition to the Democratic Party, issued a statement of support for Pelosi’s visit to Taiwan. McConnell, the Senate’s top Majority Leader, said, “It was unseemly and counterproductive for President Biden and his aides to try to block Pelosi’s visit to Taiwan.

Biden, who is seeking to ease friction with China in order to strengthen the U.S. encirclement of Russia, initially balked at Pelosi’s visit to Taiwan. U.S. military officials had expressed to Pelosi their concern that China might launch a military countermeasure.

However, the U.S. Congress strongly supported the visit, saying that China would win if Pelosi did not visit Taiwan and that the Chinese Communist Party could not dictate the itinerary to the Speaker of the House.

As if pushed by the Congress, the U.S. government also changed its policy, saying that “the Speaker of the House should make the decision himself”, based on the principle of separation of powers that the executive branch and the Congress are independent. According to the U.S. newspaper, Biden declined to ask Pelosi to cancel the visit to Taiwan.

On the other hand, Pelosi’s visit to Taiwan could be an opportunity for the Chinese military to intensify its incursions and demonstration actions around Taiwan, as it did when the Japanese government nationalized the Senkaku Islands in Okinawa Prefecture in 2012.

The military drill announced by the Chinese People’s Liberation Army (PLA) late in the evening of August 2 covered six areas, including Taiwan’s main ports of Keelung and Kaohsiung, and “surrounded the island and blockaded its main ports,” according to a newspaper in Taiwan.

A spokesman for the Liberation Army’s Eastern War Zone, which has jurisdiction over Taiwan’s periphery, stressed, “This is a stern warning against the independence movement by Taiwan’s independent forces. On March 3, the Huanqiu Times explained the aim of the military expert, saying, “From now on, military exercises in Taiwanese waters can be conducted at the doorstep of the Taiwanese authorities at any time without any area restrictions.

Just prior to Pelosi’s arrival in Taiwan, the Sukhoi 35 fighter jet crossed the Taiwan Strait and other threatening actions were reported. In response, the U.S. military has increased its vigilance by deploying a nuclear-powered aircraft carrier and an assault landing ship east of Taiwan, increasing the risk of an accidental collision.

Why Mosquitoes Appear More When It Rains

Is Gramhir a Safe Site?